One of the most interesting pieces of media created about the Quabbin Reservoir was the video Under the Quabbin producted at WBGY in Springfield.  It tells the story of an dive team lead by U. Mass Biologist Ed Klekowski that explored the biology and human artifacts clearly visible under the Quabbin, even today. As everyone in New England knows, it’s been a dry summer.  We’ve been going to the Reservoir for three years now and we’ve never seen the water level quite so low.  If this keeps up, you may not need to be part of a dive team to see what’s “under the Quabbin.”  Here at Gate 35 is what remains of the old New Salem depot on the Rabbit Railroad.  (Click on each picture for a better view.)

The Quabbin shore typically ends at the rock line, but now we’ve got sandy and, in places, marsh like beaches.

Not so obvious is the fact that the newly revealed shoreline has it’s own ecosystem properties.  In amongst that grass and mud, we found one of the richest varieties of tracks to date.  Otters:

And we have no clue as to what kind of critter made this track.  We have put some effort into researching this apparent three toed animal.  We don’t think this is a new kind of human sneaker, but we could be wrong.  If you have any ideas, please let us know.  (It’s not a heron or a turkey, which would be good guesses, but leave tracks that look more like the grouse track.)

Alas, we did not see any of these animals.  We did see and hear loon in the distance, but not close enough for decent photography.  And I did continue my unbroken record of face to face confrontations with a bald eagle when my camera was equipped with a wide angle lens and locked down securely on a tripod. I’m sure the eagle was interested in this renovated ecosystem as well.  However, the driftwood along the shoreline is always of interest, now clearly more visible.

I don’t think that we’ll be seeing the Massachusetts Water Resources Authority hit the panic button quite yet, especially since there’s rain on the way.  But the declining water levels are certainly impressive.  Sadly, another hiker passing by told us that he had seen three dead beavers at Gate 43, obviously unable to survive because the water in their habitat area was so low.  Here are two panoramas from the shoreline.  The first, looking north.

This panorama was taken from near the train station foundation ruins, looking southwest.

You can get a better look at the second panorama on gigapan.  Here’s the link.  Let’s have some rain!

Back to New York, East Side, Black and White

Back to New York again,  Chris and I, visiting Al and Donna.  We walked up to the John Jay Park area (around 76th and York) which lead to a wonderful promenade over the FDR drive, up to the Schulz Park, site of Gracie Mansion. No politicians were seen in the making of this set.  All images captured with a Nikon D200, converted to infrared by LifePixel.  Converted to black and white with Silver Efex Pro .

The architecture of New York is of course terrific.  Sometimes very accessible (click for a larger view):

Sometimes not so accessible!

You are surrounded by water in New York, though it may not seem that way.  There is water and history.

And of course trees with stories to tell. 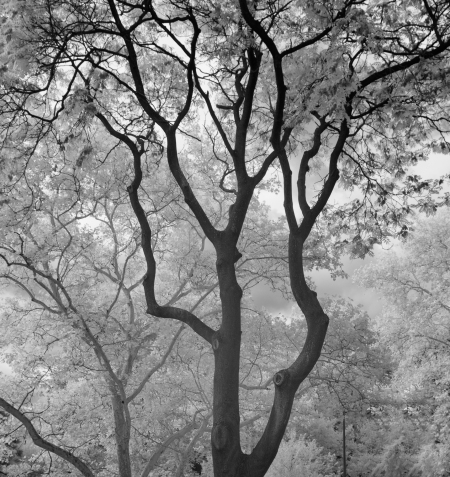 Gate 43 at the Quabbin Reservoir can be quite challenging.  It can be a long walk through the woods to nowhere, but along the way, you do see signs of life. More on that to come.  Here though is a panorama of an interesting stop along the way, a moody pond, inhabited at one point by beavers obviously.  (Click on the image to make it larger.)

You can get a much more detailed view of the image on Gigapan, here .

Bad weather actually offers some of the best photographic opportunities. Several weeks ago we were at Hanks’ Meadow in the Quabbin Reservoir Park.  It’s a very accessible place, lovely for a picnic.  It’s clearly marked if you ride through the park road off Route 9 (Belchertown, Massachusetts, USA) in either direction.  Deer and turkeys frequent the place, along with who knows what else.  It’s an easy walk down to the Quabbin waters from the Meadow.  On this particular day, however, the temperature dropped a good ten degrees in that 100 meter walk.  The Quabbin Reservoir has its own weather.  Down at the shoreline it was cold and windy, felt like a good old New England nor’easter.   (Click the images below for larger views.)

The sky was nice, but it’s interesting to play with the water as you might if photographing ocean waves or rapids in a river.  Well these aren’t ocean waves but they are waves nevertheless, so a slow shutter speed made for some interesting results.

Zooming in for a bit of detail:

Detail shots are everywhere of course.  In this case, rocks and water were no problem.  Other details presented a more difficult challenge.  We always like to take note of the small signs of life one encounters everywhere. Along the beach we noted these interesting little yellow wildflowers in great abundance, in spite of the rather rough terrain.

Repeated efforts resulted in one semi-decent close up.  Strong wind creates beautiful effects in the water, but really undermines you’re ability to shoot a decent close up of living flowers.

So when all else fails, there are those scenes that reflect the end of life. Every natural site is also an eco-archeological site as well.  The history of nature is there if you take notice.