So many holidays, so little time!  Of course, two major faiths celebrated renewal over the past week.  At the same time we had Earth Day and today, Arbor Day.  Spring is busy.  But we shouldn’t be too busy to think about what could be our most important set of relationships on the planet, between humans and trees.  So here’s to the trees. Just to review.  This is where we were at a few months back.  (Click on the images for a better view.)

(The Lancer Oak, Worcester State University)  That was rough, but slowly, there were some signs of progress. 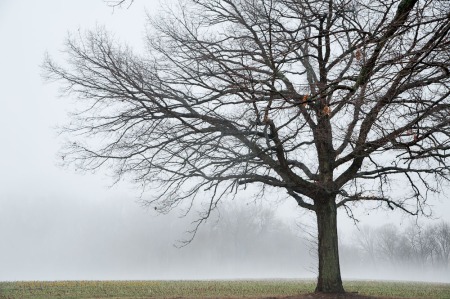 (Tufts Veterinary School, Grafton, MA)  Today, things looked pretty darn good.  As much as any other living entity, to me, trees track the course of our lives, most obviously through the seasons. 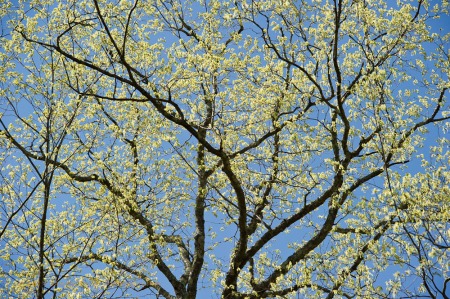 The trees are a major source of the oxygen we breath! Without them, we are in big trouble.  And they also absorb carbon dioxide, one of the atmospheric gases responsible for global climate change.  So then, let us offer a toast to our trees around the globe and consider how we might do a better job of holding up our end of the relationship.  Happy Arbor Day.

Spring is finally delivering on the goods.  Thank you.  Embarking on a video project (which still isn’t ready for prime time) has given us a chance to revisit some of our favorites, including The Bear’s Den, in New Salem, Massachusetts. Just another one of those places that almost no one knows about, and yet offers the stunning opportunity to get “up close and personal” with a waterfall.  You literally climb down into the base of the falls and commune with the Middle Branch of the Swift River as it moves toward the Quabbin Reservoir.  Thanks to the Trustees of Reservations who own the property, and leave it very wild.  Click on the images for a better view.

Those falls are maybe 30 feet tall.  Not gigantic by waterfall standards, but just as compelling as the big ones.  And of course this is important water. Boston drinks from this river.

Earth Day is this coming week, April 22 to be more specific.  The theme for this year’s Earth day is “A Billion Acts of Green.”  The idea, often mentioned, is to help out the planet by doing something positive that’s more or less right in front of your nose.  I’m very happy then to celebrate the work of a group of students from Clark University as well as volunteers from Wachusett Greenways who spent some serious time recently at one of my favorite spots, Hadwen Arboretum.  I was thrilled that the group, led by Elizabeth Redlich from Clark was interested in trying to enhance the Arboretum as part of the University’s Sustainability Initiative.  The weather’s been lousy since then, but we finally had a chance to go back and see the results of their efforts.  They basically cleaned the place up and laid out long forgotten trails, making a visit there much more user friendly.

The blue dots are the trail markers.  If you click on the image of the wonderful old Beach tree below to enlarge and look carefully, you’ll get a sense of the human/tree interaction that has been going on here for so many years.

With a good deal of the trails cleared and now passable, the trees themselves begin to reassert themselves, as was originally intended by Mr. Hadwen.

If you only view the state of environmental awareness from the perspective of politics, you’re probably a bit discouraged at this point.  Too many Representatives and Senators, including one of our own, seem to be unable to come to grips with our situation and with the opportunities before us to embrace a different way of living which will also by the way improve our economic position.  But we are not powerless in the face of all this.  The idea of A Billion Acts of Green, at least to me, is that we must do what we can to move the planet forward, even if it’s one stick at a time. So in that spirit, thanks to Clark and the Wachusett Greenways on behalf of Mr. Hadwen, and the Hadwen Arboretum Neighborhood. 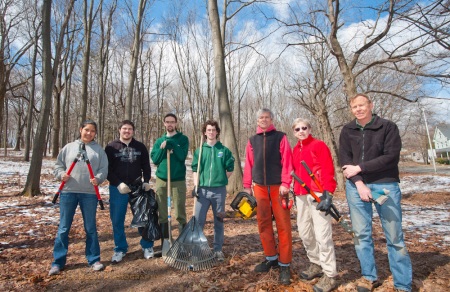 Once that place starts blossoming this spring, any day now, it will be worth a visit.  Happy Earth Day!

Over the past year or so the Division of Conservation and Recreation in Massachusetts has been seeking public comment on a new vision for Massachusetts forests including the designation of State owned forest areas as either reserves, parklands and woodlands.  You can read the draft criteria here.  The classification scheme appears to be roughly based on the ideas presented in the Harvard Forest report, Wildlands and Woodlands.

Wildlands, those with minimal human intrusion, are described as “Reserves” in the draft guidelines.  Reserves are on properties that conserve ecological and evolutionary processes, represent a major ecological setting in the Commonwealth, and have among other characteristics a low density of officially designated trails.  The idea is that these properties will be left alone, as much as possible, so that biological events could unfold as they will.   It’s interesting to contemplate what such properties will be like.  Commercial logging would not be allowed.  (Of note, sustainable commercial logging would be allowed on properties categorized as Parklands and Woodlands, much to the consternation of some stakeholders.  We’ll explore that issue another time.)  It is interesting to contemplate what such forests might be like.  Obviously there will be several different varieties.  Old growth forests in the Berkshires might be one.  The Quabbin Reservoir might be another.  The north and west sides of the Quabbin beginning around Gate 37 down to the teens.

We were able to revisit Gate 35 last week as some of the more out of the way entrances to the Quabbin Reservoir are now passable.  (It looks to me like all are passable but some of the roads necessary to get to the various gates aren’t officially opened until April 15.)  We were the only people there, at least that we could see, for the first hour or so of our stay. It is difficult to portray how powerful is the sense of being away from civilization even though it’s only a few minutes drive away.  (Click on the images for a better view.)

That of course doesn’t mean that you’re alone. 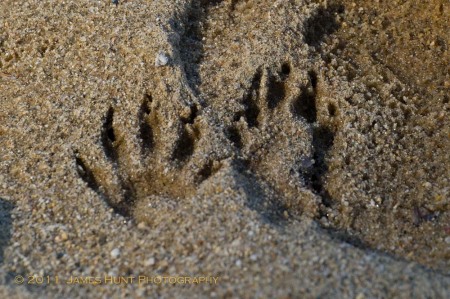 Friendly otters are nice, but other prints really tell you that while you may be only a short drive from town, you really are on someone else’s turf.

Nothing like a fresh bear print to get the juices flowing.  But that’s really the point perhaps. Wild is a relative concept.  After all, this is still a reservoir, and a human constructed wilderness.  Nevertheless, to protect the water, the forest has been allowed to evolve largely in a very unplanned fashion (some logging excepting).  It is wild enough to make you feel that you’re separate from civilization for all the peace and anxiety that accompanying that sense of separation.  Visually this comes to life as a sense of randomness broken up by the occasional pattern and sense of design. 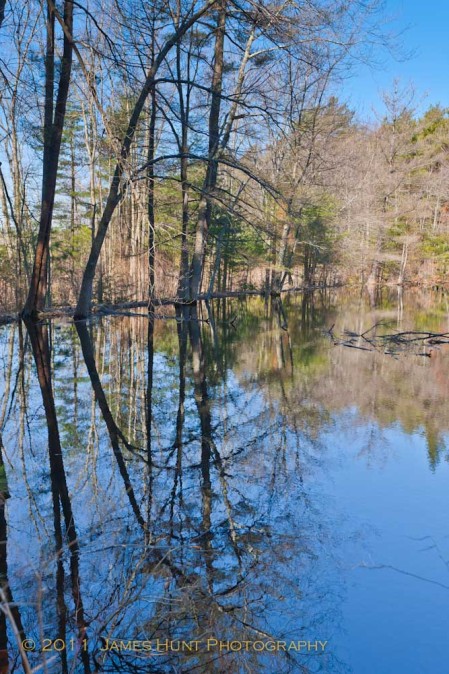 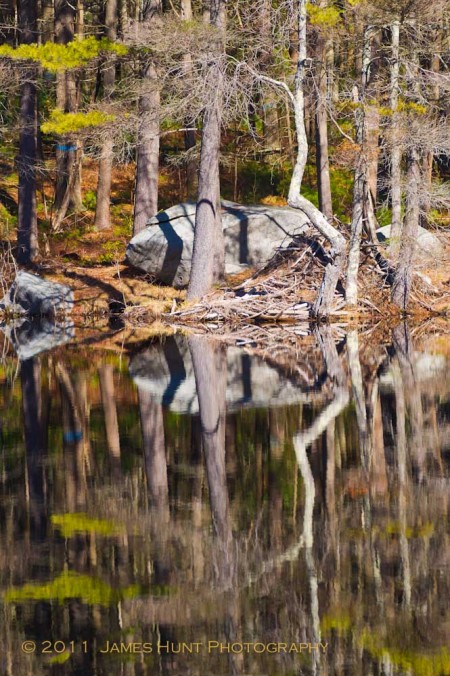 Wildlands have value beyond their importance as an ecological and evolutionary resource.  The experience of interacting with a wild place, an experience few have now, offers us an opportunity to think about the world in a very different way.

A Walk in the Gardens

We’re still waiting to move from early to middle spring.  Lines and shapes still dominate more than color.  This will change soon, but not yet.  We took a wonderful stroll along Commonwealth Ave. and through the Public Gardens in Boston.  I was hoping to create a small portfolio for some commercial work and wasn’t even thinking about nature.  I was looking more for the post card type of image, but what’s so interesting about that. Sometimes my imagination fails me. Then I opened my eyes.  “It’s the trees, stupid, the trees.”  Wonderful shapes and shadows were everywhere.  Boston takes care of its trees, at least these trees.  (Click on the images for a better view.)

They don’t stand apart from the cityscape along Comm. Ave.  They mingle with it. 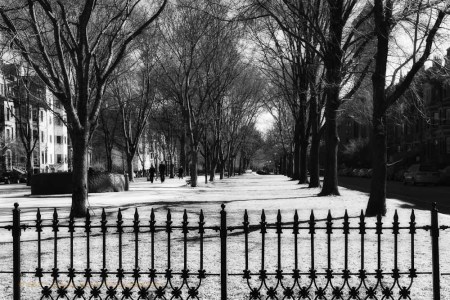 Inside the Gardens themselves, Weeping Willows are already at work.

For a change of pace, here’s a Weeping Beach.  Who knew? 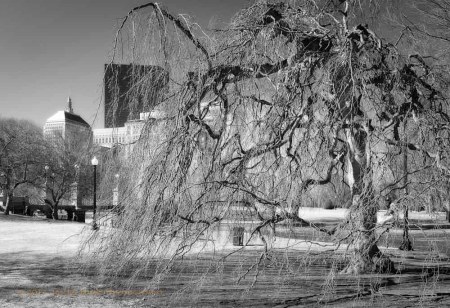 Looking more closely at the trees, there were quite a few surprises.  Not the least of which is the presence of a number of Redwoods.

So you’re not in Sequoia National Park, and the trees aren’t 2000 years old, but they are impressive nevertheless.  Life in the City.

We’ll return in the color.