The Story of the Lonaconing Silk Mill

Lonaconing, Maryland lies in the far western panhandle of that amazingly diverse state.  You should think “West Virginia” if you really want to understand the terrain.  It’s mountainous.  Coal is the mineral.  You shouldn’t be surprised by a bear crossing the road.  The economic situation is, perhaps not so good.  We recently had a chance to visit a most interesting, and historic location nestled in these mountains, the Lonaconing Silk Mill.  This was the last silk mill in the United States, in operation commencing in the early 1900’s.  It was an important employer in the area and it’s story mirrors that of so many businesses throughout the United States.  You can read more about the history of the mill here.  We had an opportunity to go through the Mill and photograph courtesy of someone I’ve mentioned quite a bit in the blog, Tony Sweet.  This wasn’t a workshop, just a photographic get together.  Many photographers are drawn to abandoned places.  The Silk Mill in that regard doesn’t disappointment.  The outside of the building is quite striking, with a reddish-orange tint.

This part of the Mill, which is most accessible (by appointment only let me stress) actually has a pleasant, warm appeal, from the outside. 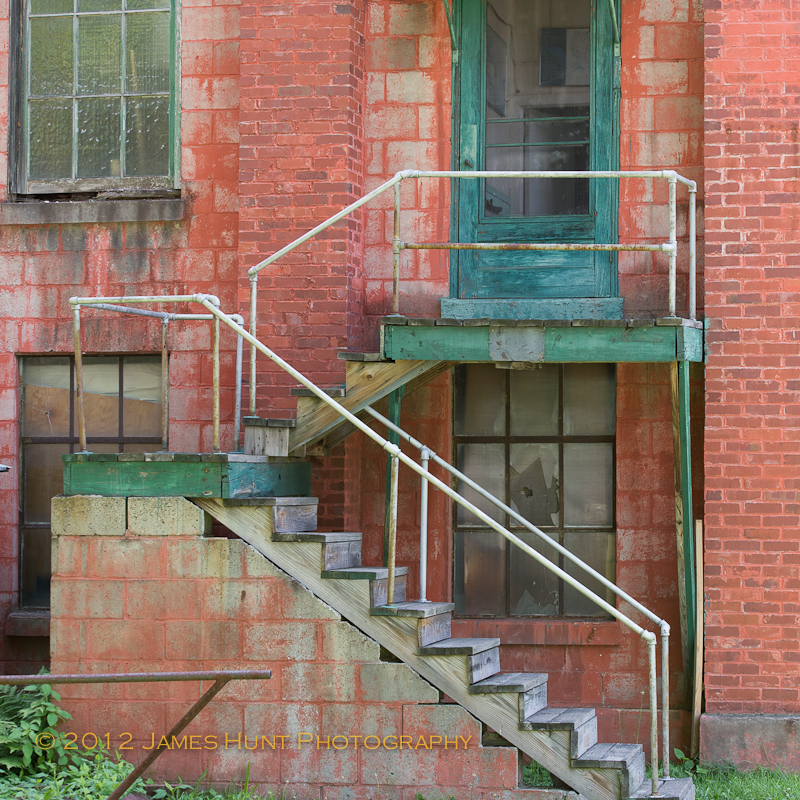 Once you enter though, you’re in a different world, an abandoned one, one of big machines from another industrial time. 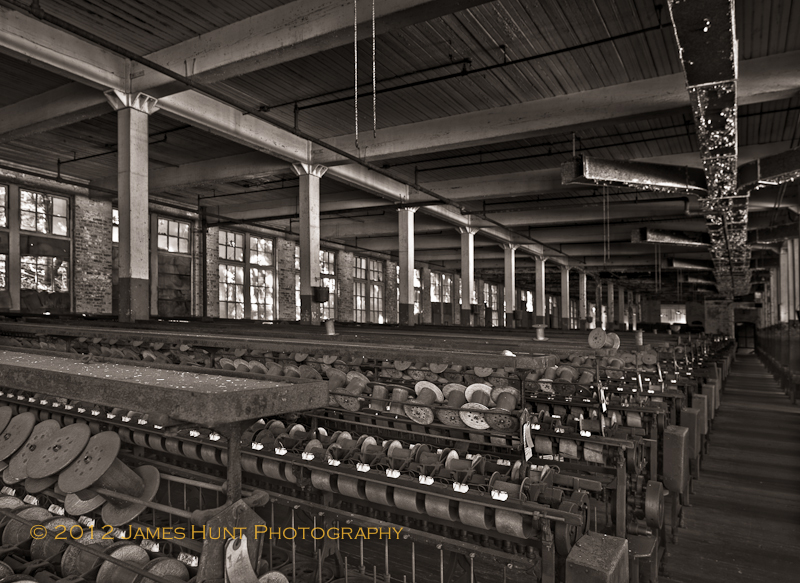 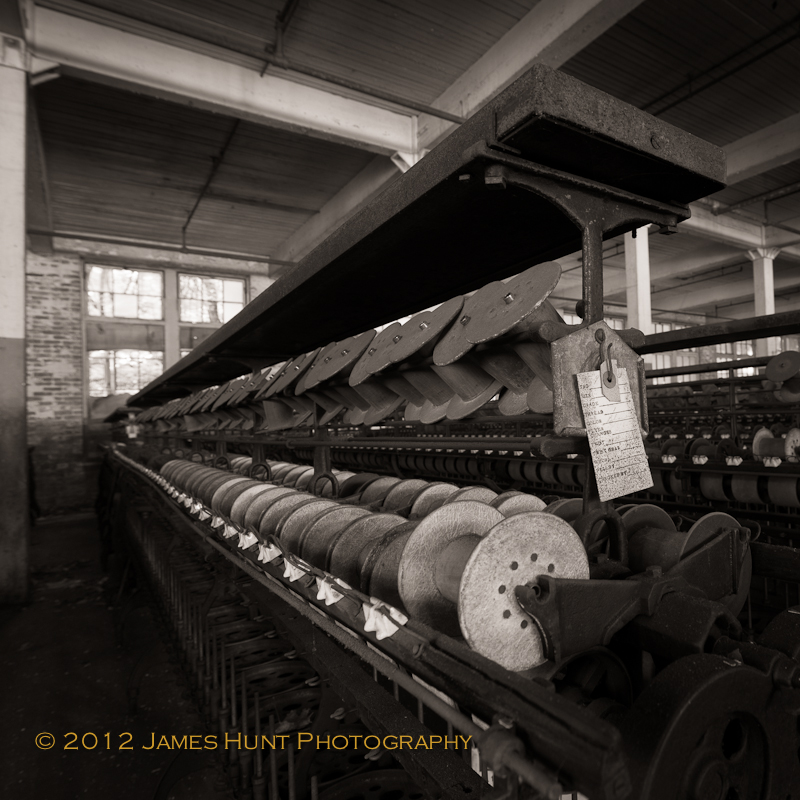 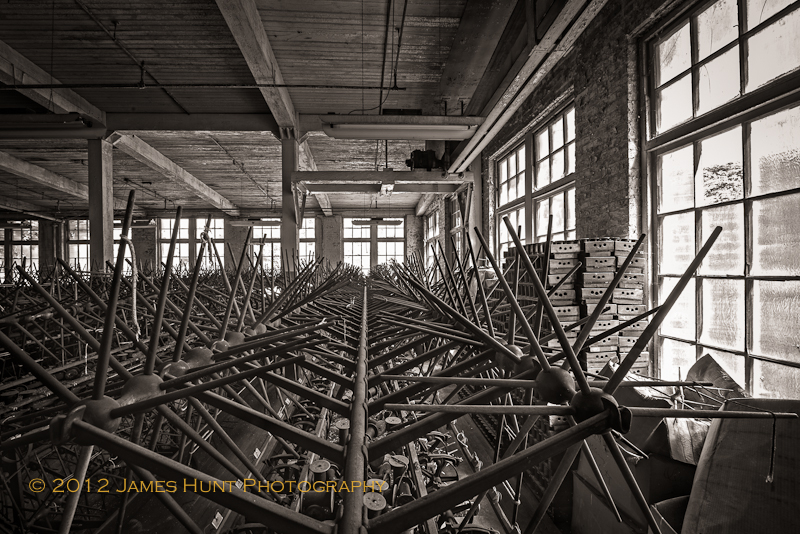 The workers, for about half a century, spun silk thread onto bobbins for shipment around the country.  This is what it was all about. 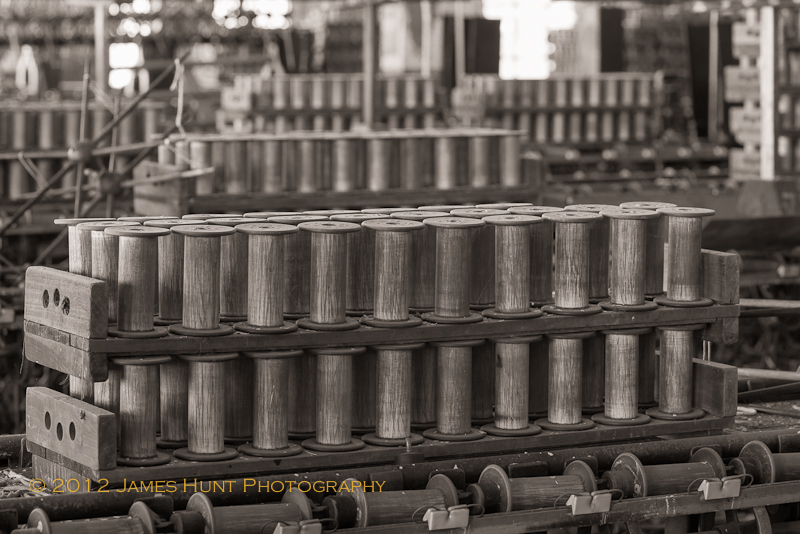 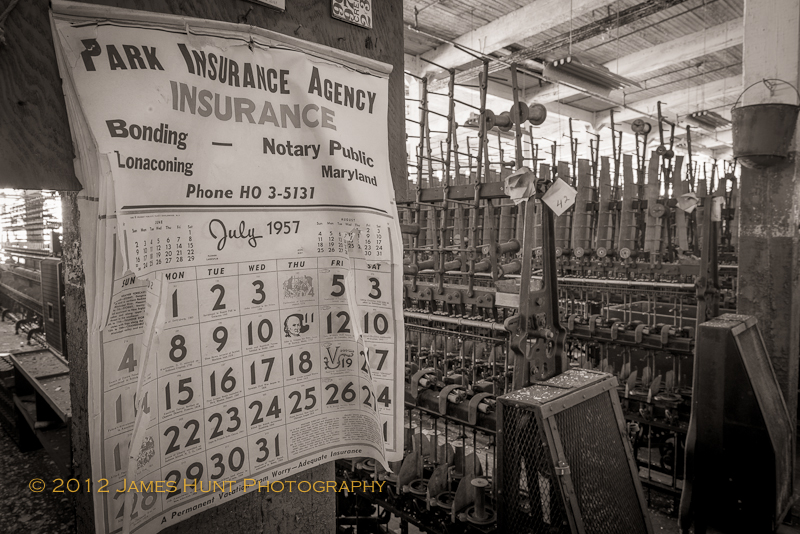 Since then, the story of the Mill has largely been one of decay.

It probably wouldn’t be fair to attribute this completely to neglect, however.  Thirty-three years ago, Herb Shepard bought the Mill, using personal funds, with the hope of preserving and restoring what he felt was an important site in the story of American industrial history.  In part, this had to do with his own feelings about those who worked there, he’s from the area and even though the factory closed more than 50 years ago, still remembers some of those who worked there, and knows something about their lives at the Mill. 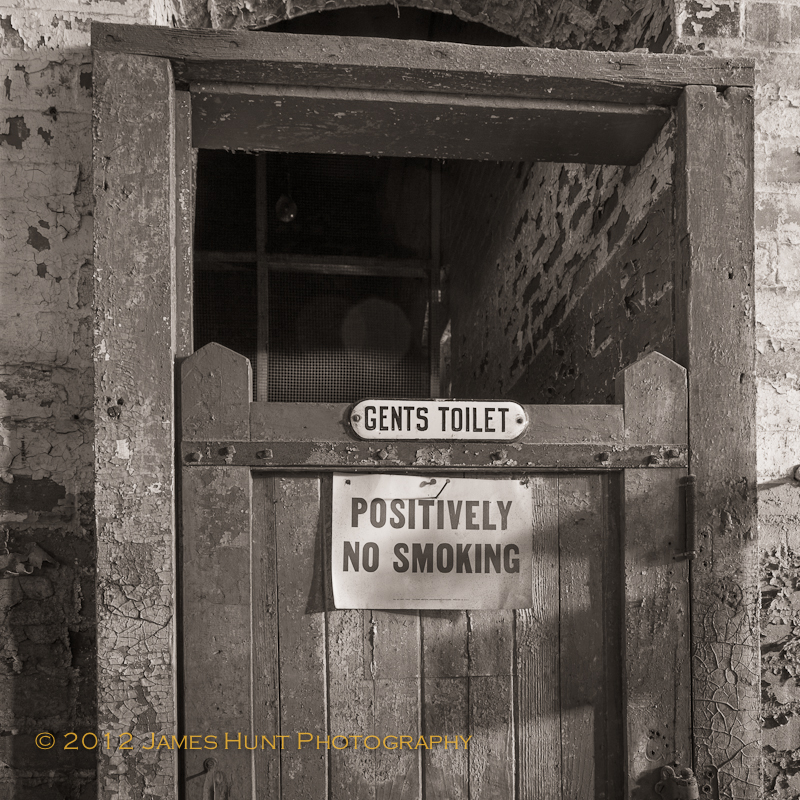 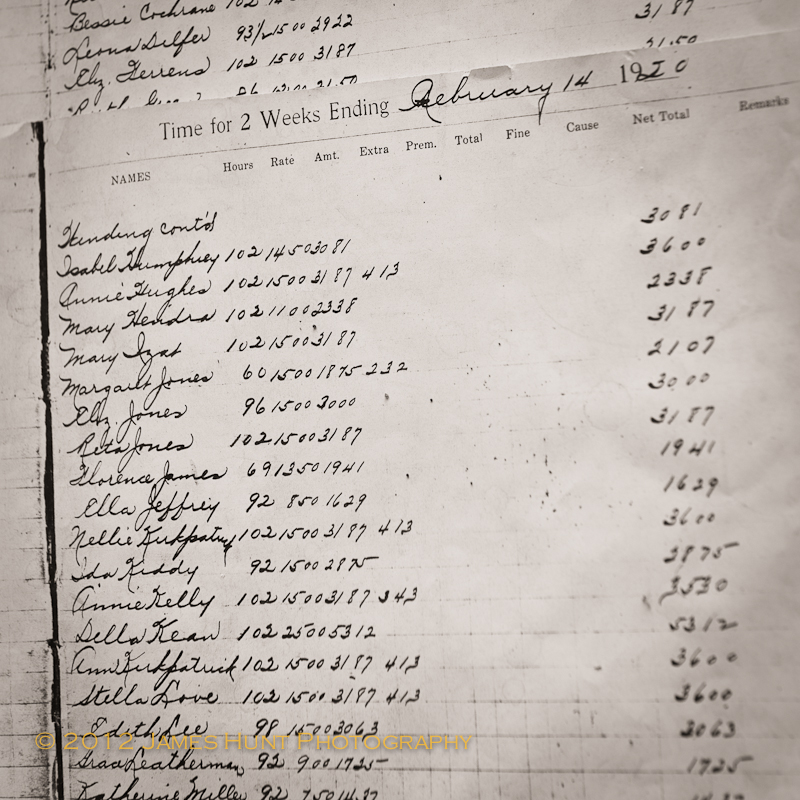 Alas, though, his efforts so far have not been successful.  He’s received interest, but no real help from the political establishment.  Without on-going sources of funding, abandoned buildings decay structurally.  The roof is now leaking, windows are broken and nature is taking over.  Preservation work is tough.  What’s the old saying in real estate, “location, location, location.”  How many people would pass this way to see a restored silk mill, even if it was the last one in the United States? Preservation work is much like entrepreneurship.  (I’d argue that preservation work is inherently entrepreneurial, but that’s a discussion for another day.)  One important ingredient of successful entrepreneurial activity is that of timing.  You can be right about everything, but if you’re right at the wrong time, you may not be successful.

Editorial and technical notes:  (1) Abandoned buildings that are visited with some regularity by photographers can present a newcomer with an abundance of what are called “set ups.”  Set ups are staged to look as though they reflected the reality at the time, but in fact, reflect the photographers’ re-enactment of that reality. Was the calendar you see actually the one left there in 1957?  I don’t know.  In addition to the impact of photographers, Herb and others have actively tried to maintain some of the historical artifacts that were, in fact, a real part of the story.  I tried in these images, to stay away from any that were obvious set ups, but I can’t guarantee that I was successful. (2) Obviously, I switched color schemes when I went inside.  The interior of the building screamed black and white, but I also obviously used a tone, a very light sepia, on the images.  The use of this warm tone for black and white imagery was a suggestion made to me by Brooks Jenson, publisher of LensWork magazine.

Several friends who viewed the previous blog post about the incredible bird convention that we witnessed at the Chincoteague National Wildlife Refuge in May wanted to get a better sense of what it was like to bump into this mass of birds hanging around on the side of a busy road.  The new breed of Digital SLRs gives us the ability to shot videos as well as stills.  That doesn’t make it easy to do, nor does it ensure a high quality outcome.  After some work and hand wringing, I decided to post this one minute video to fill out the story a bit.  I’d suggest you watch it on the HD setting, as the quality is significantly better though it may take a minute to load. The sounds you hear are the same sounds the birds heard.  This is a busy road, leading to a beautiful beach, on Memorial Day Weekend.  The birds were not particularly impressed.

Video can do things that stills can’t, so I’ll be working on my technique and equipment a bit.  The challenge of course is that doing two things at once can mean that you do neither terribly well.  In this case, I was using a stills tripod, and it shows.  Video tripods allow for smooth movement, stills tripods are built to make it nearly impossible to move the camera.  On a technical note, this video was edited in Photoshop CS6, which has a significantly improved video capability.  It’s also quite easy to use.  I suspect that we’ll see quite a few videos being edited,  on the fly as it were, in what was once a purely “stills” oriented software.

Mobile viewers:  You may not be able to see the video thumbnail (though it seems to be working on my iPhone, which would indicate that WordPress may have been working on the problem).  If you don’t see the video, please click here. Sorry for any inconvenience.

Just back from another adventure at Chincoteague, Virginia.  Chincoteague is a nice, relatively quiet island on the Atlantic side of the Eastern Shore of Virginia.  We’ve been several times and enjoyed the sites, though they tended to seem rather modest at the time.  We wanted to give it another try, and as they say, timing really is everything.  Our room looked out on beautiful sunsets.  (Click on the images for a better, view.  There will be lots of them this post and in a number of them, the subjects were quite far away.  So click!)

But we never felt very alone.  In fact, the gulls were of the “in your face” variety.

We quickly made our way to the main show, Chincoteague National Wildlife Refuge.  Chincoteague Island is really best known for the book Misty of Chincoteague, by Marguerite Henry, which was subsequently made into a movie as well.  The book tells the supposed story of a horse family that lived out in the marsh land in what is now the Wildlife Refuge.  In fact, the family was actually a domesticated lot, and the horses that live on the Refuge are probably better taken care of than any group of wild horses, anywhere, in the world.  This of course is all thanks to Misty and Ms. Henry. The horses are rounded up each fall and some are sold at auction, bringing an absolute fortune. There’s a touch of Hollywood in all that, but maybe that’s OK, if the horses are well cared for, and if it sensitizes people to the value of the Refuge.  In a previous blog I told of having never gotten a good shot of the horses on the march, because they tend to be, well eating.  Got lucky this time.  Again, timing…

These two families, at least that’s what I surmised, were heading from one protective clump of trees and tall grass to another.  The little ones just loved to run and play, which was quite a nice sight. Unfortunately, they were too far away for my lens to catch anything meaningful when playtime came. But wait, there’s more.  Two days later, we hit the jackpot.  Chincoteague also lies on the Atlantic flyway, and is a stop over, resting place, and all around inviting locale, for perhaps millions of birds each year.  Again, timing is critical.  If  you aren’t there when the large numbers are, you’re out of luck.  Not so this time.

This image captures only a fraction of the gathering that day.  There are several different species of Egrets, as well as Ibis, Terns and several different kinds of Gulls.  They were fishing.  No one was feeding them.  And for them, the timing was right as well.  Some would fish while others took a break.  Even the trees were filled with birds. 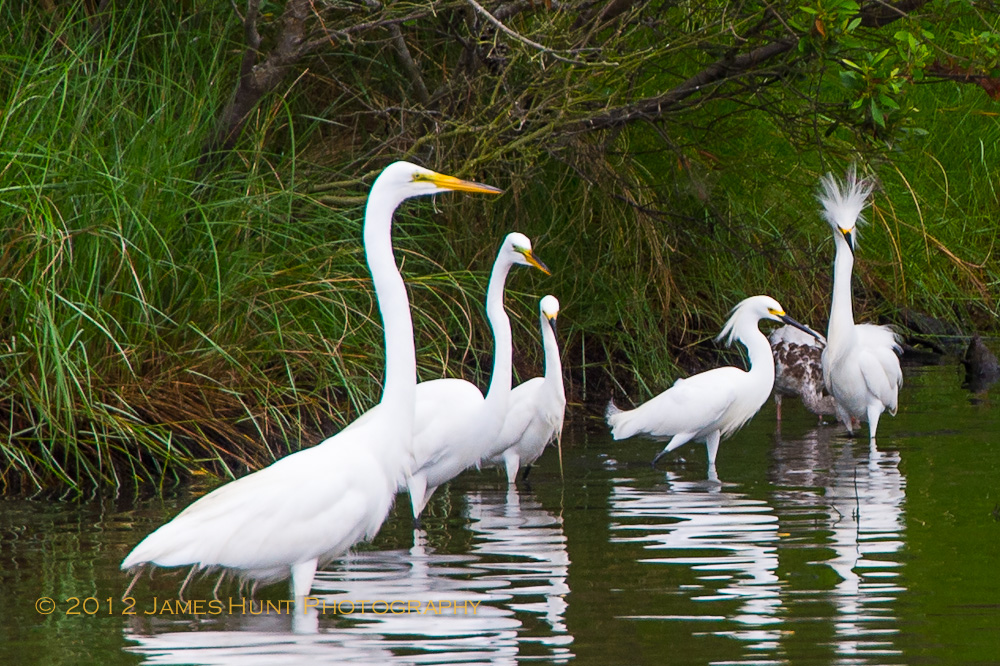 This was shaping up to be a pretty good day.  The photographic challenge though was to come up with interesting shots that conveyed something of the beauty of the groupings.  That was more challenging than you might imagine.  Catching an Egret in isolation is one end of the spectrum. Massive group shots are at the other end.  Both interesting, but the later in particular wer limited by the angle of view that was available.  They were gathered along a stream that ran parallel to the road.  Venture too far off the road, and you’ll scare even these rather dispassionate birds away.  I began then to focus on smaller groups and how their movements in relation to one another gave one the impression of a dance.

Nature provides us with powerful graphics if we stop to notice them.  Again, timing. You have to wait for some of these to unfold before you.  That wasn’t a problem in this case as the scene was absolutely hypnotic. 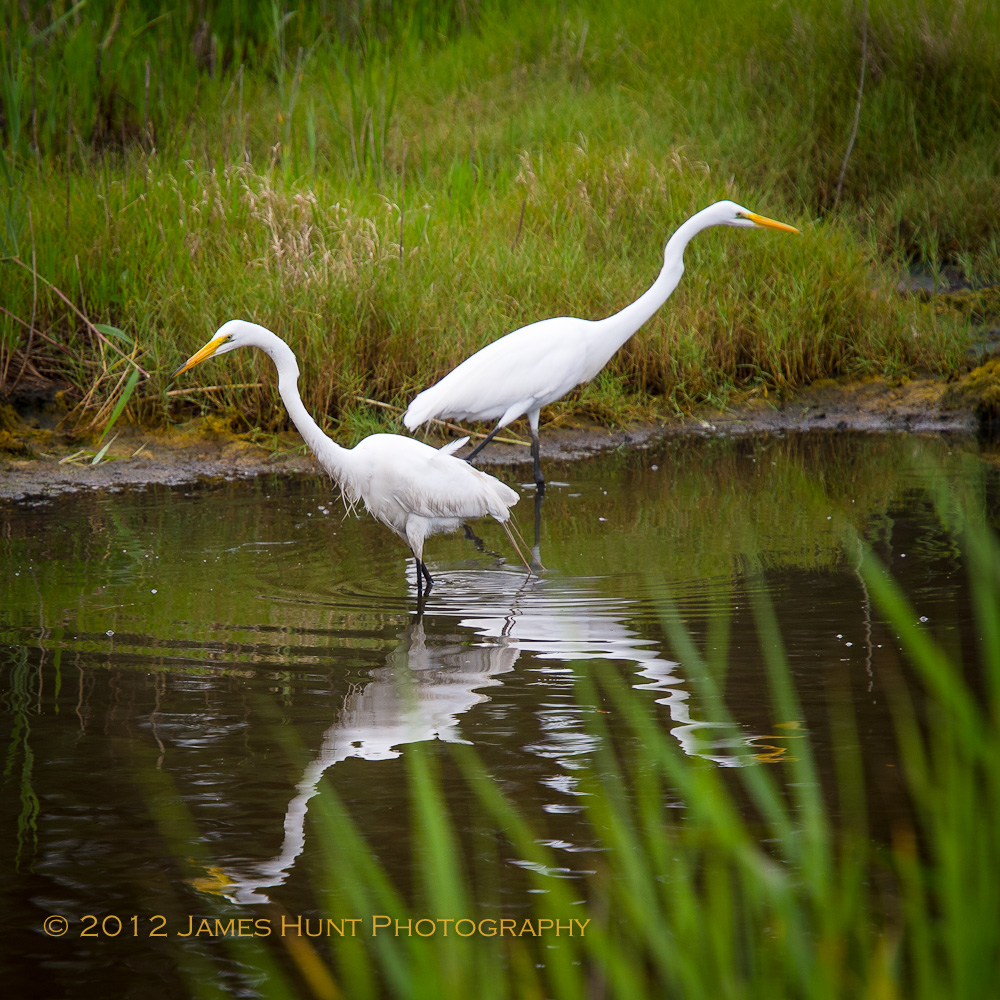 Occasionally the dance had a more provocative undertone.  There were a lot of folks fishing out there.  Perhaps too many for one spot, at times. 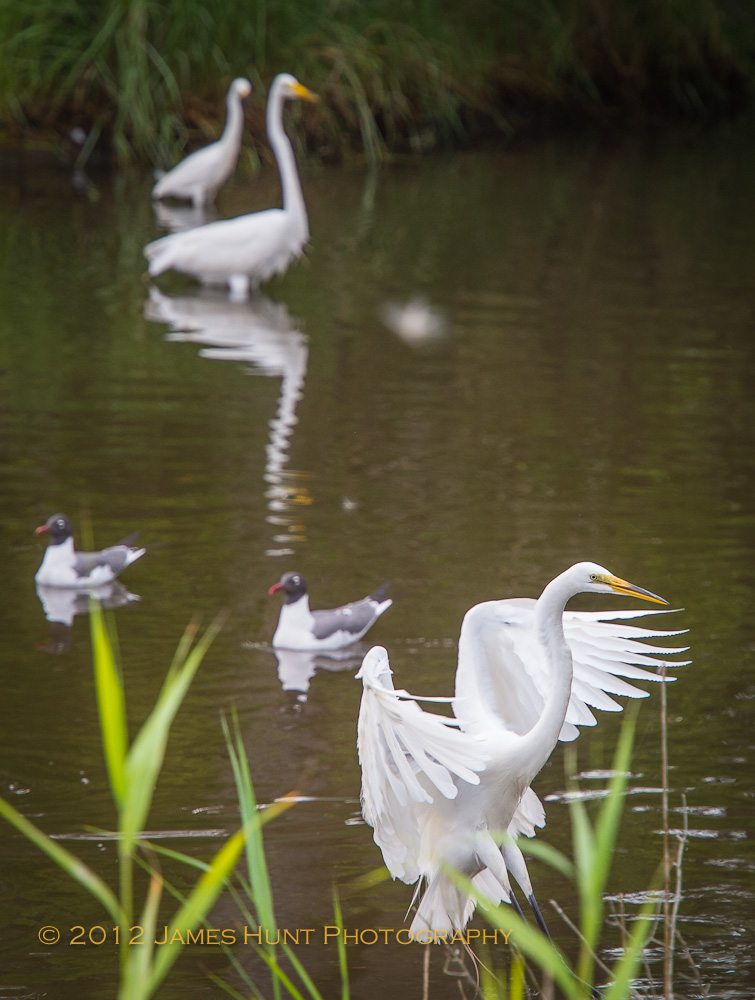 Largely though, in spite of the numbers, and the variety of species, and the finite amount of fish (worms and other assorted goodies) in the water, things were surprisingly peaceful.  It is interesting to contemplate the nature of these individual creatures, adaptable, tough and beautiful world travelers who ultimately have to make it on their own. 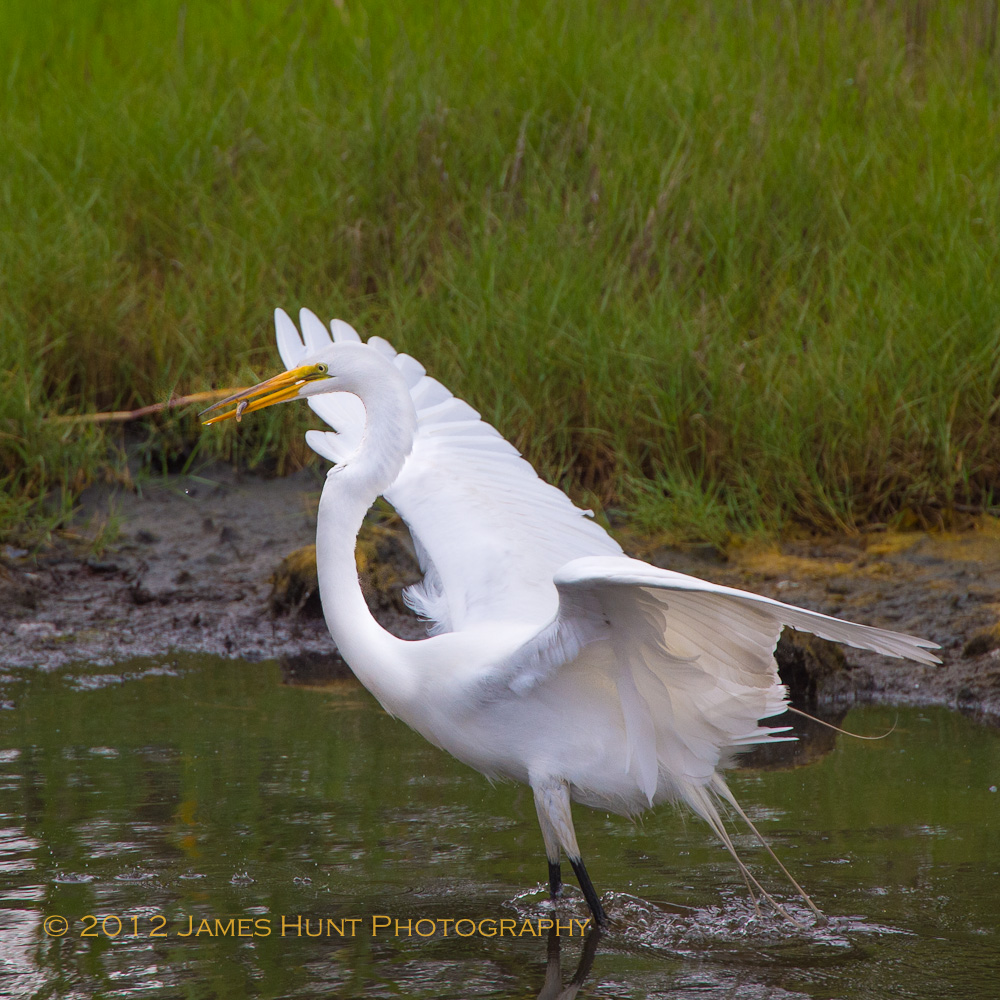 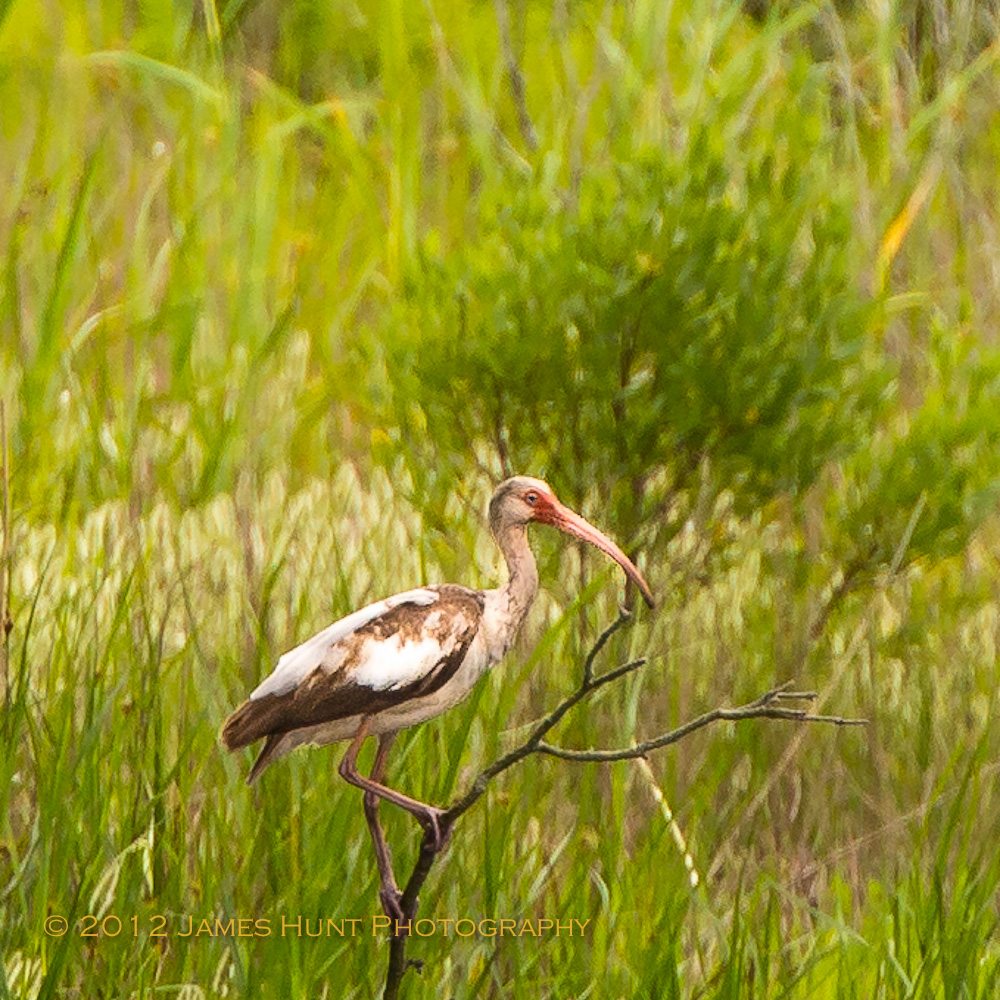 (The image above has was taken from a rather severe crop, but I thought his pose was so interesting, and vulnerable, I decided to include it in spite of the grain.)  While at the same time, they work so well with each other. 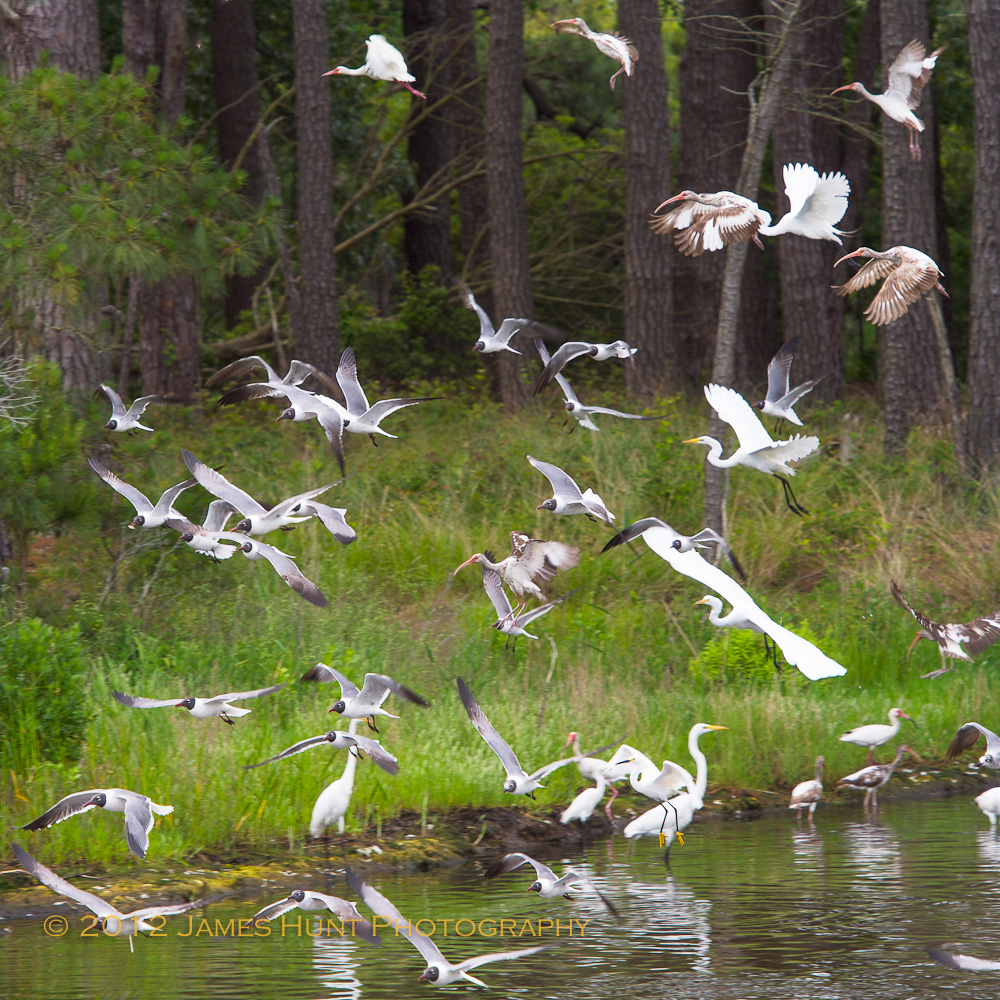 Perhaps we could learn a few things from them.  It was a good day in the field, timing wise in particular.

Tech note:  The images from the Refuge were largely made with a  Nikon D4, 70 – 200 mm VR2 lens, and a 1.7 teleconverter.  I was pleased with that combination overall.