The Rising Sea and the Jersey Shore

We are thankfully coming to the end of another abhorrent election cycle.  It’s rather easy to see just how dysfunctional our situation is by among other things what doesn’t get talked about. Readers of this blog know that in my view it is critically important to discuss, among other things, our changing environment.  We’re coming off the second biggest natural disaster in American history, and no body’s talking about what it means.  What can we learn from this?  What are the implications for us all?  Nope.  Can’t talk about it.

Now, if you’re expecting me to say that Sandy was caused by global warming, I won’t.  The reality is we can’t say that.  Yes, it is true that that freakin’ storm was breathtaking by every metric.  When it hit the Jersey shore it had a barometric pressure of around 950.  I’ll never forget the look on the face of one of the Weather Channel meteorologists when he described how the threat from the storm was worsening because of the intense low pressure at its core, a pressure reading that is extremely rare. His concluding comment was “this is bad, this is very bad.” Sandy strengthened as it approached the coast.  Evidently she was not aware that hurricanes in late October are supposed to weaken.  The water in the Atlantic though was just too warm for that. Global warming?  The best we say is “possibly, but possibly not.”  However, we can say something here that does relate to global warming.

The sea level is rising.  It’s up maybe a foot over the past century and the rise is escalating.  That means it didn’t take as much of a storm surge to do the deed as it would have a century ago.  When The Battery was first built, it was probably never anticipated that it would have to deal with storm surges like we saw last week. (When The Battery was first built I’m not even sure they knew what a storm surge was.  My guess is that in certain parts of the world, more subject to hurricanes, the locals did.  Up here in the northeast, I doubt it.)  Why is the water rising?  In their well researched book, The Rising Sea,  authors Orrin Pilkey and Rob Young describe the sea level rise in great detail, but here’s their bottom line; “The volume of water in the oceans can be increased in two ways:  by the addition of more water or by heating the water.”  (page 34)  Land based glacier’s are melting.  If you want to see it in action, go to The Extreme Ice Survey.  (Sea based glaciers are also melting but they are already in the ocean.)  More directly, global warming heats the ocean water and as everyone knows, when water is heated, it expands.  The seas rise, and when the sea gets angry, it has a shorter fuse. It’s getting warmer in large measure because of the way we live our lives.

But we must not talk of such matters.  It’s better to assume that “low taxes for everyone!” (the rallying cry of one of our local senate candidates) is just as sensible as a free lunch.  I hope that on election day those of you from the U.S. will remember the importance of addressing environmental issues as part of facing up to all our challenges.   Meanwhile, as a tribute to those struggling with the recovery on the Jersey Shore, I leave you with a few as yet unpublished images of that wonderful place and a far more peaceful Atlantic. 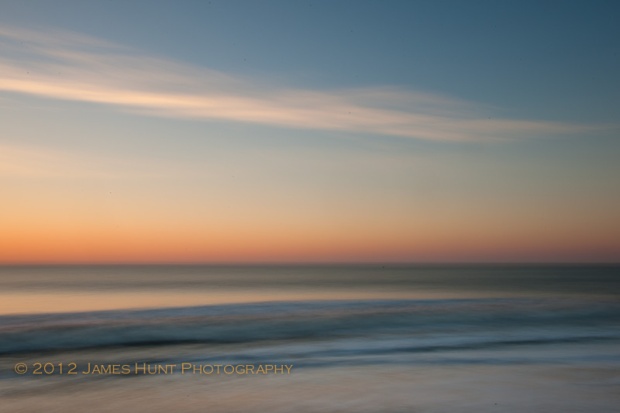 These were all taken at sunrise or sunset.  The last image is from, appropriately, Sunset Beach.