The Spirit of Place

I had the pleasure several years back of spending a week with the great travel photographer, Bob Krist.  Bob had spent considerable time and energy over the course of a career trying to understand what made for a great travel photograph, one that conveyed the “Spirit of Place.”  This is also the title of one of Bob’s best books which you can order through his web site above.  When I’m traveling now I think of his advice.  I look for images that I hope will convey that spirit of place.  It is actually quite a tall order, and you don’t get there by just taking snap shots.   Three of the elements he said were key to a good travel photograph were, not surprisingly, composition light and color.  The magic is in the fourth element, a sense of moment, something that captures what the place feels like.  Here’s one view from the Cape Hatteras area, actually the beach at the Pea Island National Wildlife Refuge visitor center. 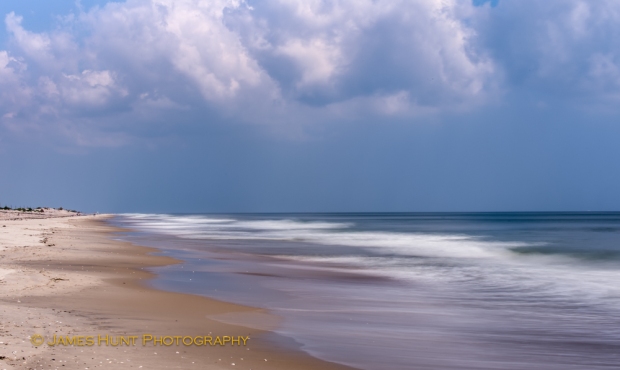 It’s really not that hard to get away here, even though just a few miles north in Nags Head, the joint is teaming with visitors.  Perhaps this is what most people think of when they think of this Cape this feeling.  It takes you some place else, thankfully.  If you are interested in Bob’s approach to travel photography, I am very happy to report that a video of his, Spirit of Place:  The Art of the Traveling Photographer, has been legally posted here.  This seems to be the only place it’s available.  It’s worth the hour.

Tech note, though it may seem inappropriate given the state of mind I hope the image invokes:  This is a long exposure, about four seconds.  To make this happen in the incredibly bright sunlight I had to pull out every trick I could think of.  I had eight stops of neutral density over the lens, which was all I had.  I was shooting at F36.  So it comes out soft, who cares.  I was at ISO equivalent of 50.  My next move was to tar paper the lens.  The fun part of course is that I couldn’t see the back of the camera at all.  It was just too bright.  I could just barely make out the histogram so I thought I might have a decent exposure, but could’t know until I got back to the car.  Fittingly, it was just like shooting with film.