What the Landscape Tells Us

I’ve been working my way through a most interesting book, The Language of Landscape, by design professor and photographer Anne Whiston Spirn.  She is on the faculty at MIT and her work is very scholarly (I like that, but it might serve as a warning to those who don’t).  I will try to capture her point succinctly, though I’m sure I’m damaging it in the process.  The landscape we see is talking with us if we know how to listen.  In fact, the landscape is telling us about itself, its history and the forces that shape the landscape, be they geological, meteorological or human.  Some such stories are authored almost totally by nature, think of the Grand Canyon telling us about the power of the flow of a river.  However, such solely authored works are harder to come by then one might image.

Humanity is often on the cover jacket as well, working with, around, through or co-opting nature as a co-author.  The hand of humanity is obvious in some cases.  The suburban office building and parking lot tell us a story about the economic intent and values of the designers and perhaps the surrounding community, albeit one we might find boring.   Such is not always the case of course.  Sometimes the story is more complex and perhaps more interesting. Sometimes design, even design by humans, can result in something quite unusual.

Thinking like this has helped me take a different approach to some of my photography over the past several years.  In particular, I’ve been hanging around the Winsor Dam and Goodnough Dike, the structures that are largely responsible for holding back the waters of the Swift River and creating the massive Quabbin Reservoir.  The Reservoir, for the new visitor, is the source of drinking water for much of eastern Massachusetts.  It is a marvelous resource that is also surrounded by an accidental wilderness, with wonderful forests and wildlife.  It was created at great sacrifice, particularly for the several thousand people put off the four towns take to create the Reservoir.  As I have said many times here, we should all be thankful for the sacrifice of others.  (If you don’t see the importance of a resource like the Reservoir, Google “Sao Paolo Drought.”  You will see a horrific story of the very rapidly dwindling supply of water in the reservoirs surrounding Brazil’s largest city.  The supply in the main ones is down to around 5 – 10%.  They may run out of water in just a few months.  Twenty million people.  There for but the grace of God and the sacrifice of others…..  But back to my story.)

So the creation of the Reservoir is a complex, sad and wondrous story.   These images were taken on or below the largest of the structures, Winsor Dam, located in Quabbin Park, Belchertown and Ware, Massachusetts.  What is the landscape saying? 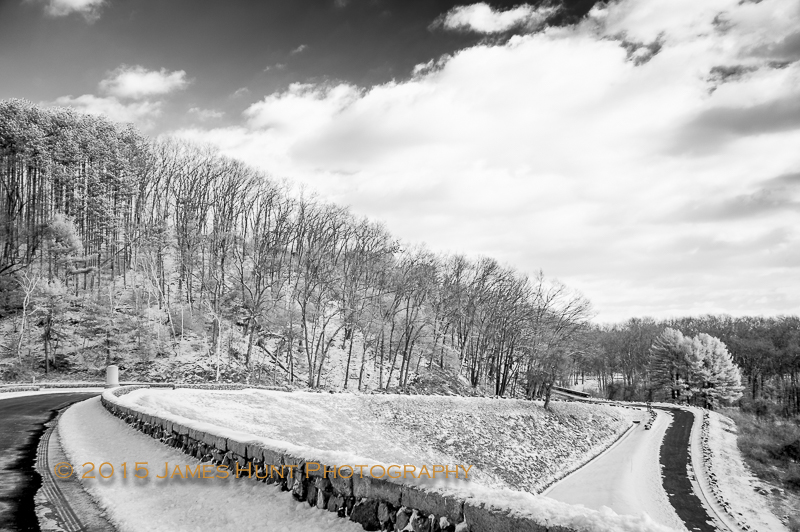 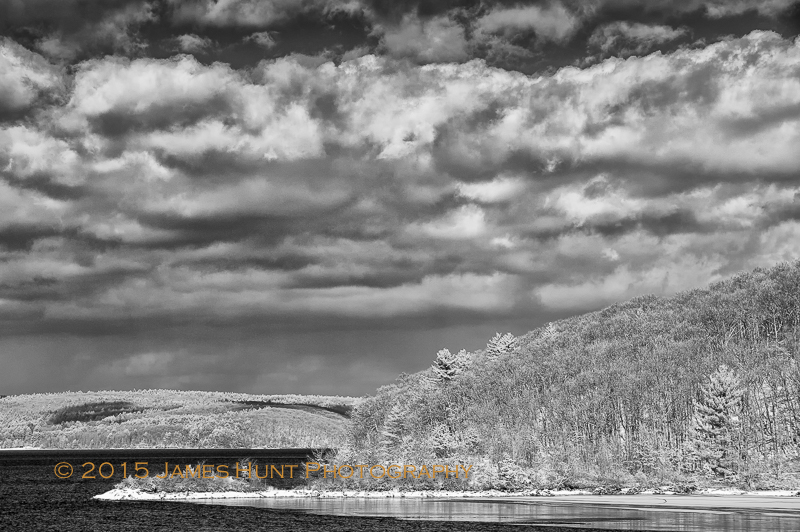 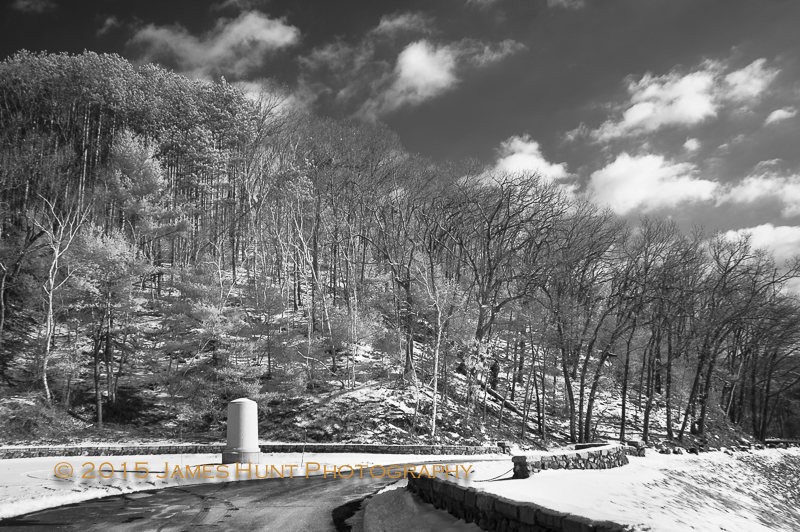 There are I’m sure many answers to the question.  I was talking with a friend the other day, a colleague at Babson who loves to fish in the catch and release area just below the Dam.  I asked him what the Dam looked like to him.  He agreed, it’s not your typical dam.  I’ve been trying to find out the motive behind such an unusual design.  There are many engineering related answers.  An earthen dam makes sense given the location.  There was appropriate soil nearby for the construction of such a dam.  You have to plant grass on the side of an earthen dam and keep trees off of the dam itself.  That part of the story seems very relevant.  But does it explain the way it looks?  In his book, From Valley to Quabbin, author J.R. Greene quotes an article from the Amherst Record, dated October 11, 1946; “This is the Quabbin Reservoir created by  man for utilitarian purposes yet so panned that a great engineering feat has been skillfully blended with nature,” (Greene, 2010, pg. 126, Athol Press).    I suspect the story the landscape here is trying to tell us has more to offer.

Let’s Do It Again

Happy New Year.  I hope you had a nice Holiday.  We did.  Lots of family gatherings which was great, but we did make some time to get out and do some work in the field.  The weather was nice for the most part and not terribly cold, till the last few days.  That was very useful because of an ongoing project that has my attention, on the spiritual nature of the Quabbin Reservoir, or perhaps I should say, its spiritual impact.  (If you’re new to the blog, click on the key words below and you’ll be guided to a few posts that will give you some background, or of course, just “google” Quabbin Reservoir.)  As an accidental wilderness with historical as well as environmental importance, it has a way of bringing people into the fold.  I happened to bump into another photographer at Gate 30 last week, a terrific wildlife shooter, who had gotten the bug a year or so back and now went out there whenever possible.  I’m not just referring to photographers, though.  Far from it.  We’ve run into people from all walks of life who have been captivated by the experience of being there.  They often have trouble putting that feeling into words it seems.  But as a photographer, I approach the question visually of course.

While the ice can be a terrific subject, I’ve  been focused more on the relationship between the water and the forest.  Gate 37 in Petersham presents some wonderful opportunities to explore this relationship.  Here Fever Brook, which runs through the Federated Women’s Club State Forest on its way to the Reservoir actually meets the Reservoir.  The local engineering firm, Beaver and Beaver, has taken it upon themselves to create a rather large pond here.

The reflections are stunning and give one the sense that the water and the forest are conversing. 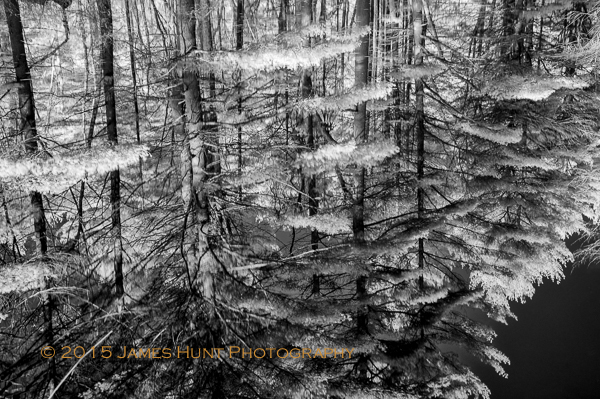 As I’ve mentioned a few times, I was unfortunately ill during part of 2014 and was far less active in the field than I had hoped.  Things are better now and I hope to be a bit more productive.  We have much to be grateful for.  One of the spiritual tugs I feel when I visit the Quabbin is that of gratitude.  I’m terribly appreciative of the fact that I get to go to such  wonderful location, that the Reservoir not only provides us with both water and air, as if that wasn’t enough.  It gives us an opportunity to be grateful for the sacrifices that others make on our behalf.  We’re looking forward to 2015. 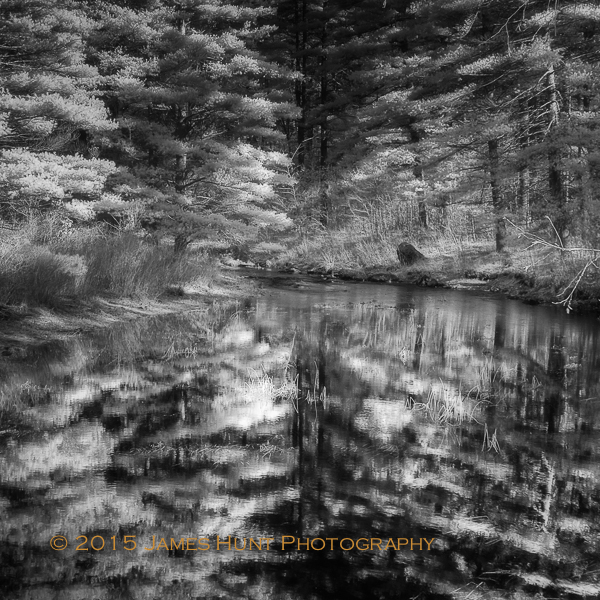